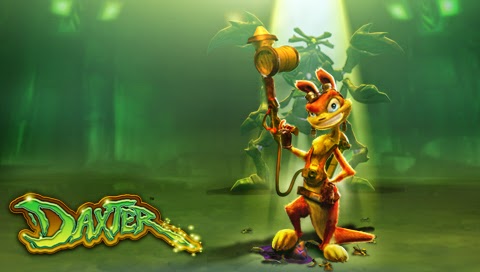 Daxter is a platform video game developed by Ready at Dawn. Part of the Jak and Daxter series of games, Daxter takes place within the two-year time-span between Jak and Daxter: The Precursor Legacy and Jak II. It is a platform game starring its protagonist Daxter, a creature known as an "ottsel" (a fictional hybrid of otter and weasel).

The game takes place in the final months of the two-year gap presented in the opening of Jak II, between the moment when Jak is taken prisoner by the Krimzon Guard and the time in which Daxter finally rescues him from the Krimzon Guard Fortress. The introduction shows Jak being captured, while Daxter manages to escape. Almost two years later (having no luck with rescuing Jak), Daxter has forgotten all about finding his friend. An old man named Osmo, whom Daxter meets, hires Daxter as an exterminator working in various parts of Haven City, and occasionally its environs, to exterminate bug-like Metal Heads referred to in-game as 'Metal Bugs'. During his adventures, Daxter meets a mysterious woman named Taryn who, despite being less that impressed by Daxter's interest in her, occasionally helps him.

When Daxter tries to stop Kaeden from escaping the shop, Kaeden suddenly blows up the shop with a bomb he placed in the shop earlier. Daxter and Osmo survive, and Daxter promises to stop Kaeden, but only after he rescues Jak. Daxter infiltrates the Fortress and finds Kaeden, who reveals himself to be a giant Metal Bug. Daxter manages to defeat Kaeden, who tries to warn him that Kor is waiting outside for them, and then uses a hover platform to begin searching for Jak within the Fortress, leading into the opening cutscene from Jak II. After this, the game cuts to a point later in the timeline at Daxter's Naughty Ottsel Bar, where he is recounting the story to Jak, Keira, Samos, Tess, and Taryn.

Due to his new job, Daxter is now equipped with an electronic blue eco powered bug-swatter, which acts as his melee weapon, and an extermination tank, which sprays green eco based bug spray to stun enemies. The tank eventually receives several modifications, including doubling as a type of jet-pack that allows Daxter to fly, flamethrower capabilities, and an ultrasonic attachment.

The flamethrower modification allows Daxter to hover higher and longer in jet-pack mode. With the ultra-sonic attachment, Daxter can shoot a blue eco projectile that causes high radial damage, but uses one fifth of the player's maximum bug spray. When the player finds a small space where Daxter's normal stance cannot squeeze through, the player simply presses the triangle button for Daxter to crouch. The game also features levels where Daxter navigates vehicles to move around massive areas quickly. The player can also double-jump in order to reach great heights.